Marta Pappalardo is a full professor of Physical Geography and Geomorphology at the Department of Earth Sciences of the University of Pisa (Italy). In the scope of her interest is the geomorphology of coastal areas as a pattern of human settling through time.

He worked more closely on the reconstruction of paleogeographic scenarios within the ancient urban contexts and on the use of geoarchaeological markers to change the sea level with the purpose of studying coastal shapes. The areas of her research are on the north coast of the central Mediterranean, the Atlantic coast of northern Spain and Argentine Patagonia.

Giovanni Boschian is a geologist and associate professor of anthropology at the Department of Biology of the University of Pisa (Italy). He teaches anthropology, archeology of the environment, human ecology and geo-arheology.

The main topic of his research is the interaction between hominine and natural environment that leads to the adaptation of cultural behavior to environmental change. His work is predominantly – albeit not exclusively – related to cave sites and processes of their origin, ie by studying natural and anthropogenic deposits using geo-archeological techniques and micro-morphological studies of the soil.

It has recently been dealing with the effects of the cold phase of the late Pleistocene on the Mediterranean natural environment and population, by shifting neanderthals to early modern humans in Italy, Croatia and Bosnia and Herzegovina, using caves by neolithic cattle farmers on the Mediterranean and copper-clad settlements in the southern Caucasus. Stratigraphic and geo-archaeological expertise contributes to the study of Paranthropus robustus sites in South Africa and the paleoanthropological researches of Laetoli and Olduvai sites in Tanzania. 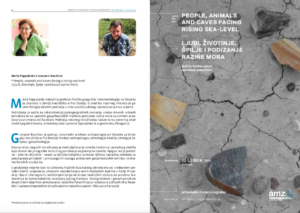