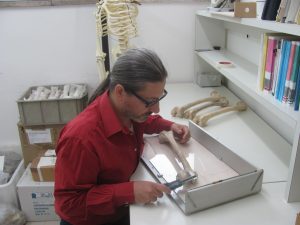 The summer school will be held at the Department of Animal Science at the University of Zagreb Faculty of Agriculture, from July 3rd to 7th, 2017.

The scope of the Course is to use a “hands-on” approach to give the participants a basic knowledge of the aims and methods of Functional Morphology and of Geometric Morphometrics, and how they can be used in bioarcheology to infer subsistence economy, mobility and in general activity patterns (Functional Morphology) and quantify the variation in morphology, especially those pertaining to evolutionary and biological processes (Geometric Morphometrics) in past populations.

The main goal of morphometrics is to study how shapes vary and their covariance with other variables. The first method of morphometrics called” Traditional” morphometrics was done by measuring linear distances (such as length, width, and height) and multivariate statistical tools were used to describe patterns of shape variation within and among groups. The biggest problem was that linear distance measurements are usually highly correlated with size and this makes shape analysis difficult. Instead of focusing on multivariate analysis of a set of linear measurements between points, Geometric Morphometrics to studies changes in size and shape, taking as a point of departure displacements in the plane (2D) or space (3D) of a set of morphometric landmarks. The two- or three- dimensional spatial relationship of these landmarks is always preserved throughout the whole analysis, which allows to accurately build shape and size of the specimen studied.

The course is free; participants will be provided with basic course material. Food and/or accommodation are not included.

Lectures will be held in English.

Summer school is open to MS, MA and PhD students, postgraduate students of Archaeology, Biology, Biotechnology/Animal Science and Earth Sciences preferably (but not exclusively) from the University of Zagreb (CrEAMA Initiative), Cambridge and Pisa and MendTheGap members. No special knowledge and skills are required, but strong motivation and a specific interest in bone biology and its aspects connected to bioarchaeology is highly desirable. Basic knowledge of statistics will also be useful but not necessary.

Participants are warmly invited to keep in mind that the course will be based on collaboration and sharing of knowledge, as requested by the guidelines of the H2020-TWINN projects. Consequently, participants with different cultural background will be requested to actively interact and help each other.

The maximum number of participants is 10. In case of more than 10 applications, the applicants will be selected in order to give an opportunity to students of all levels and on the first arrived/best served criterion. Please send your application, motivation letter and a CV with relevant information to prof. Damiano Marchi (damiano.marchi@unipi.it) by June 24th, 2017. A second circular with detailed information will be sent to the selected applicants, hopefully by June 29th.

Participants proficiently following the whole course will be awarded a participation certificate.

Pere Ibáñez-Gimeno is a biologist who specialised in Biological Anthropology through a MSc and a PhD at Universitat Autònoma de Barcelona, Spain (2009-2015). His research focused on the structural, morphological and biomechanical variation of the hominoid postcranial skeleton. Part of his research investigated the rotational efficiency of the forearm in extant hominoids with the main purpose of determining whether it reflects locomotor and manipulative abilities. In 2015 he was appointed Post-Doctoral research associate at PAVE group, University of Cambridge. His research, within the ERC-funded ADaPt project, tries to disentangle how the human post-cranial skeleton adapts to its functional requirements and how neutral and selective processes contribute to its shape.