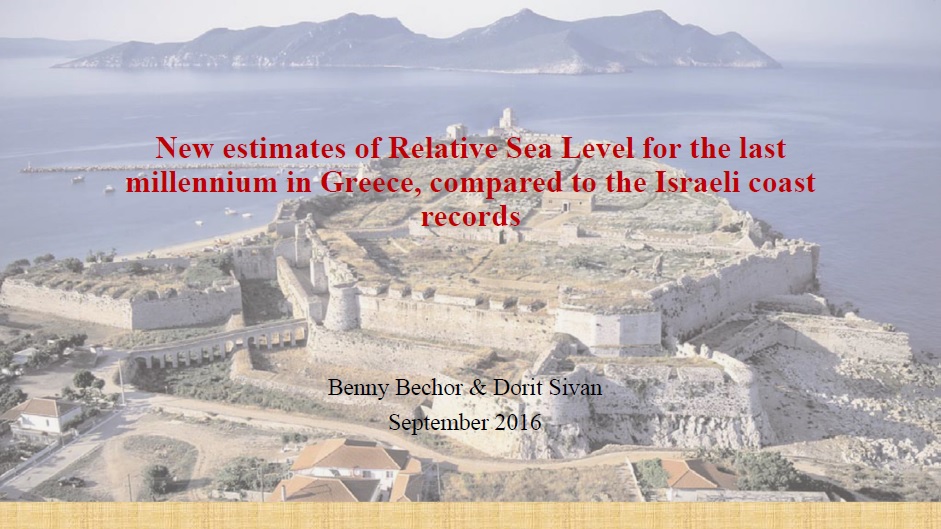 New estimates of Relative Sea Level from the last millennium in Greece, compared to the Israeli coast records

This research, presents an interdisciplinary study linking archaeological evidence with historical accounts and geological processes. The study aims to search for archaeological and historical indicators to relative sea level (RSL) from the 12th Century to the early 17th Century in the Peloponnese and Aegean islands mostly on Venetian coastal constructions, evaluation of the changes in sea level, consideration of tectonic and isostatic contributions, and comparison of these results with those from Israeli coast studies.

Greece and the Aegean islands were heavily investigated before by many other scholars, who traced after sea-level changes for the late Holocene, but without focusing on the last millennium. The current study performed new observations, after a site survey in several places in the Peloponnese, Crete and Paros island.

The new estimates combine archaeological markers along the coastline with historical records such as: ancient maps, panoramic views and eyewitness description, evaluating the dating and the functional height of a specific archaeological indicators relative to the mean sea level (MSL) at the time of operation.

The tectonic contribution to RSL was evaluated using evidences of past earthquakes, from archaeological data and historical records. Although the study area is an active seismic zone with frequent earthquakes, this study did not indicate any influence of the seismic activity in the selected sites for the relevant period, and assumes that the tectonic contribution is negligible.

The contribution of glacial isostatic adjustment (GIA) to RSL was calculated by spatial analysis on the selected sites for the relevant elapsed time period, using the public domain SELEN program.

This study, produced an eustatic sea-level curve for the Venetian coastal structures in the Peloponnese and Aegean islands. The curve (Figure 1) exhibits lower sea-level by about -1.0 m in the 12th Century, climbing gradually to around -0.20 m in the beginning of the 17th Century.

Comparison between the current study sea-level curve with those made on the Israeli coast for the Medieval time using only archaeological indicators, as presented in the Figure 1, exhibits some similarities. The current observations confirmed low sea level in the mid-12th Century, as observed in the Israeli coast in the mid-13th Century and the results are correlated with the trend of global sea level changes, for the last Era, with larger data sets. Moreover, the data points of the current study manage to fill the gap of missing archaeological index points in the Israeli studies between the years 1250AD to 1700AD presented in Figure 1.

On other hand, current study could not corroborate sea levels observed in the Israeli coast earlier then the 12th Century, probably due to shortage of archaeological sea level indicators (SLI) in Greece for this period.

Further high accuracy measurements are required, to better quantify of the East Mediterranean sea-level rise during the last millennium and to provide improved context for the assessment of the Medieval sea-level trends.