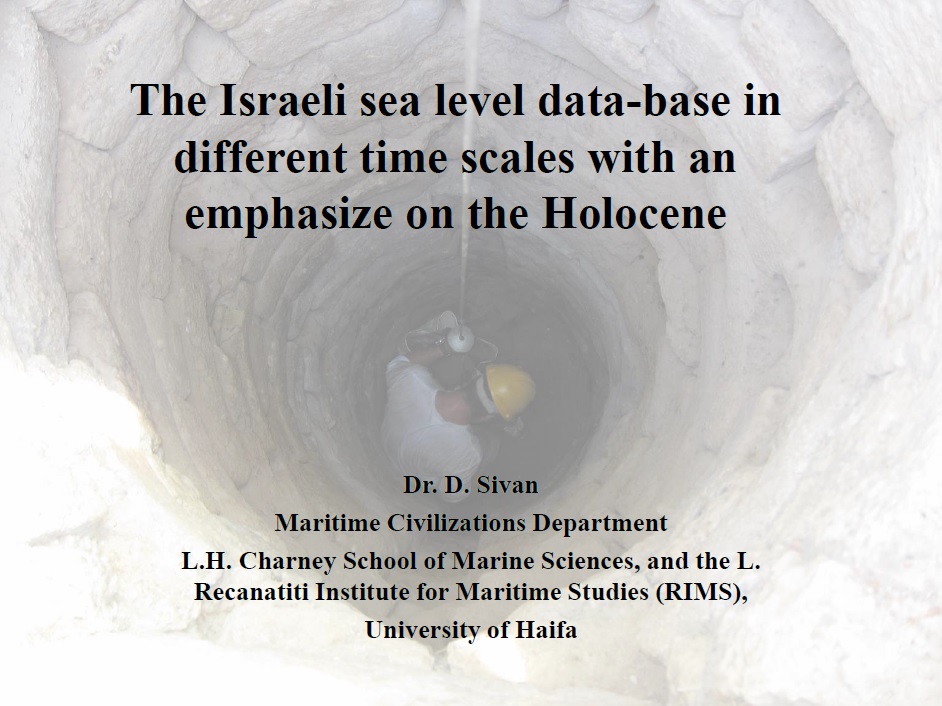 The coast of Israel, east Mediterranean is relatively tectonically stable and isostasy is low: ≥0.2mm/y in the Holocene (Sivan et al., 2001) and ~0.05 mm/y in the last 125ka (Sivan et al., 2016). The coast also contains a lot of archaeological remains on the coast and underwater, dating back mainly to the Holocene, with an emphasize on the last 3,000 years with additional bio-construction indicators (Dendropoma petraeum reefs at the edge of the abrasion platforms that exist along the Israeli coast).

Sivan et al. (2001), collected all relevant Holocene archaeological data on the coasts and underwater, divided it to different kinds of RSL indicators and tried to determine their vertical reliability. The Holocene curve is constrained by model prediction made by Prof. K. Lambeck. The observations were divided to: a. man-made structures that originally had relation to the RSL, e.g. pools, flushing channels, sewage channels, etc., b. coastal water wells and c. shipwrecks, differ by their vertical rate of accuracy. Later the study focused mainly on the last 2000 years based only on coastal water wells (Sivan et al., 2004) from Caesarea (southern Carmel coast) that was built by king Herod at the end of 1st century BC (from 22 to 10 BC). 64 coastal water wells were surveyed in an area of less than 1 km2  dating from early Roman period (1st century AD) to the end of the Crusader period (end of the 13th century AD). The RSL was found to be around present level in the Roman period, slightly higher in the Byzantine period, with significant relatively low levels (with an average of about 0.5m) in the Crusader period (11th to 13th century AD). The low levels were later studied in detailed (Toker et al., 2012).  ) with results obtained from archaeological indications in various sites (mainly Akko and Atlit). Bio-construction indications, dated mainly to the last Millennium, were found to be in agreement (Sivan et al., 2010; Sisma- Ventura et al., 2014). Lately we re-assessed all previous RSL Israeli data, differentiated between data that obtain only SL constraints and index points, and found out that 121 out of 139 index points are defined reliable.

It can be therefore summarized: that the Israel database is continues and reliable (from tectonically stable area with negligible GIA effect) and therefore can serve as regional sea level reference. The Israeli results suggest near-present stable levels in most of the last 2000 years with lower levels in the first half of the last Millennium.

On-going research is focusing now on other east Mediterranean countries, mainly Greece, with an emphasize on the last Millennium low levels with plans to enlarge it to the east Adriatic sea.