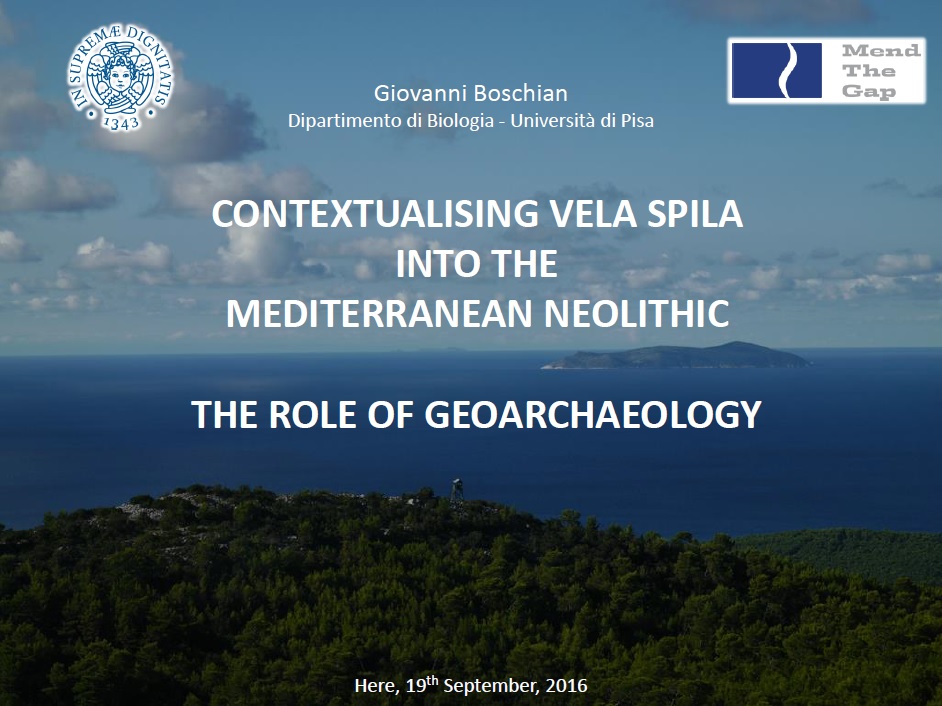 Contextualizing Vela Spila into the Mediterranean Neolithic: the role of geoarchaeology

The Neolithic levels of Vela Spila are characterised by sediments showing peculiar characteristics: they form complex and usually long, well-bedded successions of black and white layers centimetres to millimetres thick; the layering is usually sub-horizontal or slightly domed and heap-like features are often observed; abrupt terminations and lateral facies changes are common. These successions are often intercalated with more or less homogeneous sediments and in general the colour contrast is striking, giving these sediments an appearance resembling ‘layer cakes’.

Under a microscope, at high magnification, it can observed that the rather peculiar components of the white part of these sediments are the following.

At lower magnification, the phytoliths are arranged together with organic matter in fibres complexly organised in structures that resemble sheep/goat or cattle dung.

The association of these components suggests that these layers derive mostly from the burning of herbivore dung (coprolites, phytoliths and spherulites) together with vegetal matter (charcoal, ash and phytoliths); bone, burnt bone, lithic artefacts, pottery shards and clods of burnt sediment are rather rare. Phytoliths were observed inside coprolites, and are systematically associated with spherulites, indicating that they mostly derive from herbivore dung.

Dung accumulated on the ground, which was covered by a vegetal litter made of straw and/or leaves or branches.

The black and white alternations of burnt layers indicate cyclical combustion of the dung and of the litter accumulated within the cave. This was probably done intentionally every year after the shepherds temporarily left the cave for their transhumance migration, to reduce the size of the dung accumulation and possibly also to sanitise the environment.

It can be concluded that Vela Spila was used for periodically stabling sheep and/or goats and possibly some cattle. People were probably living in parts of the cave where these sediments were not found, sharing part of the space with their animals.

Several Neolithic to Iron Age sites of coastal and inland Croatia, as well as all over the Mediterranean region contain these archaeological sediments, called with the French name fumiers, which are commonly interpreted as the product of pastoral activities, in a complex way of landscape exploitation that included agriculture in the lowlands and pastoralism on hills and plateaux.