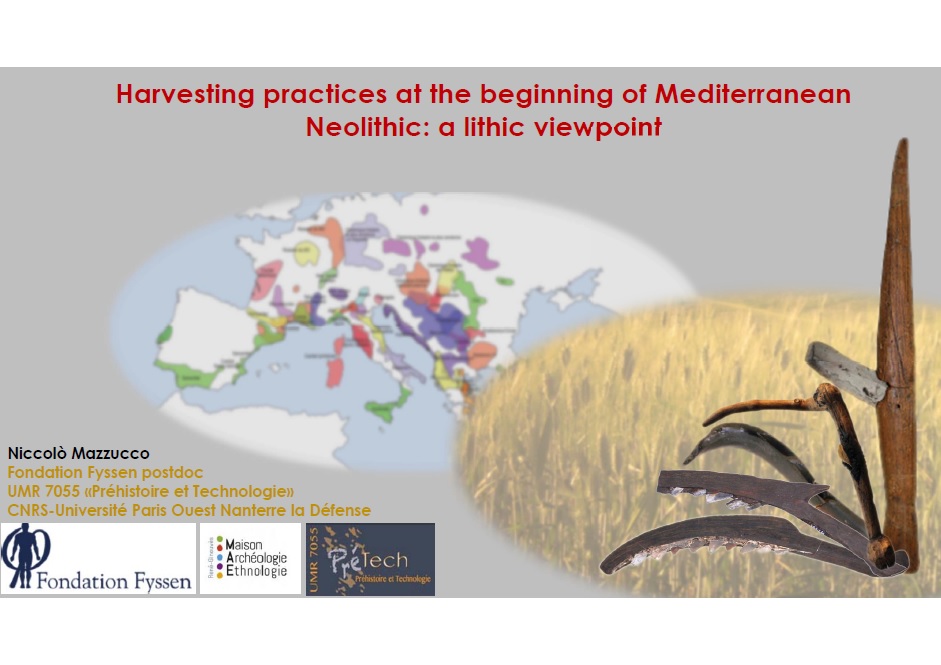 Harvesting practices at the beginning of Mediterranean Neolithic: a lithic viewpoint

It is well established that between the 7.000 and the 5.000 BC the first domestic crops and animals were spread from the Near East to Europe; nevertheless, the mechanisms and the routes of such diffusion are yet to be unfolded. Until now, the diffusion of farming has been mainly studied by analyzing macro- and micro-botanical remains, studying both their morphometric and taxonomic variation and their genetic history. However, agro-pastoral systems can be also approached by studying the changes that such practices have produced into technology. New know-hows and tools appeared and pre-existent technologies were adapted to new economic tasks.

Two recent research projects are dealing with this topic through the study of the harvesting technologies: “Diffusion of Neolithic: agricultural technologies and innovations in the Central Mediterranean” funded with a post-doctoral grant by the Fyssen Fondation and the collective project “PRE-HADRIA: Le temps des moissons: l’arrivée des premières communautés d’agriculteurs en méditerranée centrale” funded by the Maison Archéologie & Ethnologie, René-Ginouvès. The main aim of these projects is to reconstruct the technical system related with production and use of harvesting tools in different regions of the Central Mediterranean: the Italian Peninsula, Dalmatian coast and Greece. Harvesting is, indeed, an economically and socially strategic task for Neolithic societies and the implementation of an appropriated reaping technology is a fundamental phase of agricultural production. The reconstruction of the type of harvesting method adopted is possible through the traceological analysis of the so‐called ‘sickle blades’. Indeed, use‐wear traces allow highlighting the existence of different types of hafting modes and, hence, different type of sickles and different harvesting gestures.

Preliminary results are showing that different harvesting tools and methods existed in the Central Mediterranean, differing both in terms of the technical system involved in the production of the sickles and in the type of agricultural product obtained through the harvesting.