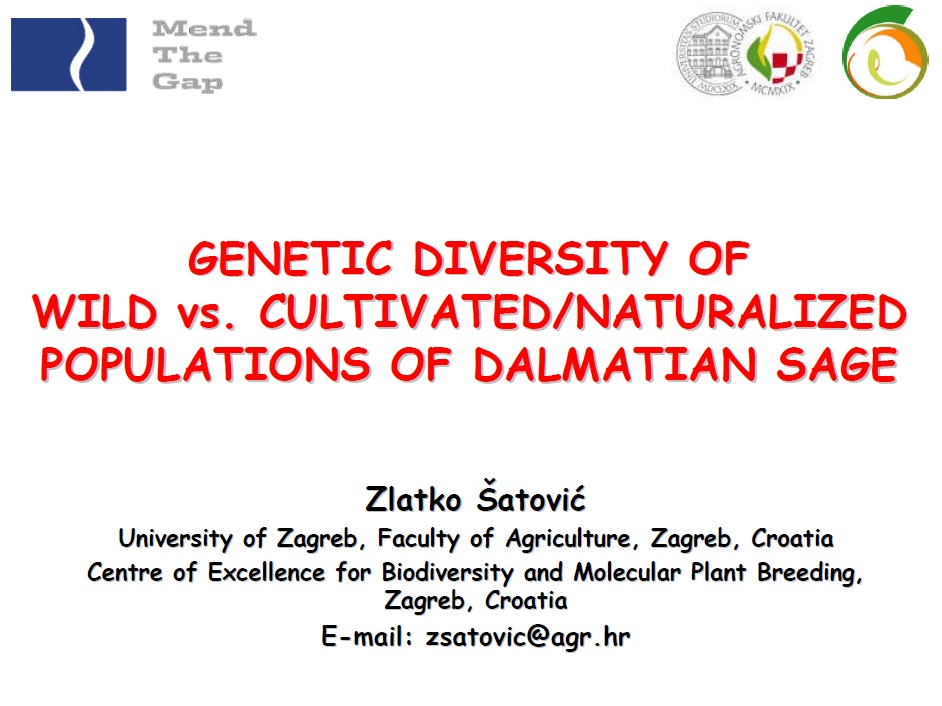 Genetic diversity of wild vs. cultivated/naturalized populations of Dalmatian sage

Faculty of Agriculture, University of Zagreb

Centre of Excellence for Biodiversity and Molecular Plant Breeding, Zagreb

In order to introduce the research of CrEAMA’s Plant Genetics group to our MendTheGap colleagues from different scientific backgrounds, I presented our ongoing investigation on Dalmatian sage with the intent to explain how can molecular markers be used to reveal information about the past history of a species.

Dalmatian sage (Salvia officinalis L., Lamiaceae) is a well-known aromatic and medicinal Mediterranean plant that is native in coastal regions of the western Balkan and southern Apennine Peninsulas and is commonly cultivated worldwide.

We used eight microsatellite markers to investigate evolutionary history of indigenous populations as well as genetic diversity and structure within and among indigenous and cultivated/naturalised populations distributed across the Balkan Peninsula. The results showed a clear separation between the indigenous and cultivated/naturalised groups, with the cultivated material originating from one restricted geographical area. Most of the genetic diversity in both groups was attributable to differences among individuals within populations, although spatial genetic analysis of indigenous populations indicated the existence of isolation by distance.

Geographical structuring of indigenous populations was found using clustering analysis, with three sub-clusters of indigenous populations. The highest level of gene diversity and the greatest number of private alleles were found in the central part of the eastern Adriatic coast, while decreases in gene diversity and number of private alleles were evident towards the northwestern Adriatic coast and southern and eastern regions of the Balkan Peninsula.